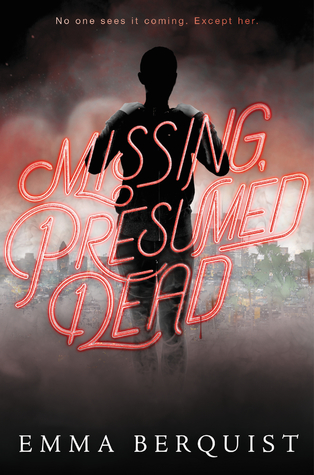 Missing, Presumed Dead by Emma Berquist
My rating: 4 of 5 stars

With a touch, Lexi can sense how and when someone will die. Some say it’s a gift. But to Lexi it’s a curse—one that keeps her friendless and alone. All that changes when Lexi foresees the violent death of a young woman, Jane, outside a club. But Jane doesn’t go to the afterlife quietly. Her ghost remains behind, determined to hunt down her murderer, and she needs Lexi’s help. In life, Jane was everything Lexi is not—outgoing, happy, popular. But in death, all Jane wants is revenge. Lexi will do anything to help Jane, to make up for the fact that she didn’t—couldn’t—save Jane’s life, and to keep this beautiful ghost of a girl by her side for as long as possible.

Before starting the book, I forgot to read the synopsis again, so I went into it thinking it was just a contemporary mystery, but then I was delighted to see a paranormal angle to it, too. The world draws most of it canon from regular supernatural myths, with one exception – the ghosts in it give out heat, instead of making things go cold. Lexi is psychic in that she can interact with ghosts as material people, and she can see a person’s death when she touches them. During a recent streak of missing people, including one from her own community of magical folk, she comes across a girl, Jane, who is about to die that very night. When she later meets her ghost, she vows to help find her killer. Their investigation is not easy as Jane, unusually, doesn’t remember what happened.

Lexi’s personality is the aloof sort, as she has to stay away from people so as not to brush up against them and learn of their deaths. The constant loneliness from keeping herself apart is something that eats away at her, and also makes her not trust permanence of something. With the ghost version of Jane, she finds a kindred spirit, but she isn’t sure if Jane likes her for her, and with the possibility that she might choose to pass on after she gets justice, she isn’t willing to put her heart on the line. The romance is subtle, and unobtrusive. The writing balances well between developing the characterization but also keeping a good pace in the plot. The mystery, meanwhile, kept me guessing as to the person, but there were hints as to why they were having a hard time getting any leads. Finally, The world set up in the book is interesting, and I would love if there were more books because it seems to have the potential for more stories.

Received an advance reader copy in exchange for a fair review from Greenwillow Books, via Edelweiss.