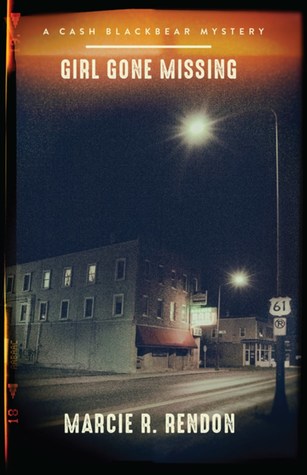 Girl Gone Missing by Marcie Rendon
My rating: 3 of 5 stars

Nothing in Renee Blackbear’s world had prepared her for college or for the hurt that happens in the Twin Cities.

Her name is Renee Blackbear, but what most people call the 19-year-old Chippewa woman is Cash. She lived all her life in Fargo, sister city to Minnesota’s Moorhead, just downriver from the Cities. She has one friend, the sheriff Wheaton. He pulled her from her mother’s wrecked car when she was three. Since then, Cash navigated through foster homes, and at 13 was working farms, driving truck. Wheaton wants her to take hold of her life, signs her up for college. She gets an education there at Moorhead State all right: sees that people talk a lot but mostly about nothing, not like the men in the fields she’s known all her life who hold the rich topsoil in their hands, talk fertilizer and weather and prices on the Grain Exchange. In between classes and hauling beets, drinking beer and shooting pool, a man who claims he’s her brother shows up, and she begins to dream the Cities and blonde Scandinavian girls calling for help.

Note: not a YA novel; not recommended for younger teens

Set roughly in the 60s, this novel about a young Native American girl in college who gets caught up in a missing persons case. I was through about a third of the book when I realized (from external sources) that this book isn’t the first in the series. However, it fills in the blanks enough and gives plenty backstory that it doesn’t feel like you are missing out on any story. Now, it is not exactly a mystery but instead has more of noir vibe, if you know what I am saying? For a lot of the book, it is just setting up the atmosphere and dips lightly into the mystery of the missing girls, and the actual ‘mystery’ comes in the last quarter.

Renee ‘Cash’ Blackbear is a freshman in college, and she makes a living working a beet truck and at the pool tables. She is clever and tests out the beginner classes she is taking; she also faces microaggressions with the college staff constantly underestimating her. When she hears about her missing classmate, she contacts and informs her previous guardian and only parental figure, the sheriff of her town. While he is looking into the matter, she is searching for answers in her dreams where she can astrally project her consciousness over her neighboring towns. The sudden arrival of her long-lost brother (who is a veteran of the Vietnam war) in her life also changes her a bit, making her think back on the families she was passed around in, the abuse she suffered, and the simple fact that she doesn’t know what to do when she is being cared for, for a change. In between the lines and overtly, there is also discussion of how Native American children done wrong by the government, the situation with the movement asking for civil rights, sex slavery, the Vietnam war, and just the life in farming communities.

Most of the book is about her daily routine; now this actually sets the mood and atmosphere for the book, and describes her characterization without actually putting words to it. But then again, sometimes the book overdoes that and we get unnecessary details of her day-to-day tasks, like her waking up, getting ready, going to college, going straight to the farms after college or the bar to play pool or the rec center to play pool; these take up a bulk of the book, and since it all just repeats and repeats they all feel insignificant by the end. Three-fourths of this book is just describing her actions, and they get boring after the first couple of times, because nothing is actually happening with the plot while words are getting wasted on a mystery that doesn’t even bother to leave out clues. When she finally gets to the cities, and the time comes for her to save those girls, that is only when the plot feels like it has picked up to go somewhere.

So, while this is a nice character-centric book, as a mystery or crime novel, it leaves much to be desired.

Is it diverse? The protagonist is a Native American woman (OwnVoices)

Received an advance reader copy in exchange for a fair review from Cinco Puntos Press, via Edelweiss.