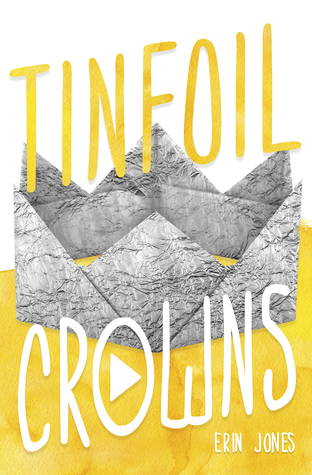 Tinfoil Crowns by Erin Jones
My rating: 3 of 5 stars

Seventeen-year-old internet video star Fit is on a mission to become famous at all costs. She shares her life with her fans through countless videos (always sporting some elaborate tinfoil accessory), and they love her for it. If she goes viral, maybe she can get out of her small casino town and the cramped apartment she shares with her brother and grandpa. But there’s one thing Fit’s fans don’t know about her: when Fit was three-years-old, her mother, suffering from postpartum psychosis, tried to kill her.

Now Fit’s mother, River, has been released from prison. Fit is outraged that River is moving in with the family, and it’s not long before Fit’s video followers realize something’s up and uncover her tragic past. But Fit soon realizes that the only thing her audience loves more than tragedy is a heartwarming tale of a family reunion. Is faking a relationship with River the key to all Fit’s dreams coming true?

A story focused on family and internet fame, Tinfoil Crowns is told from the dual perspective of Fit and her mother, River. Fit has a sizeable following on her YouTube channel and has dreams of getting out of her small town. She lives with her younger brother and her grandfather, both of whom she is used to bossing around with her tantrums. When her mother comes to live with them after her sentence has been over, Fit takes her presence and her family’s acceptance of her mother to be a sort of betrayal. Initially she is openly hostile to River, but when Fit’s new opportunity to be an even bigger YouTube star coincides with her mother’s presence in her life, she jumps to utilize the emotional value of such a situation. Along the way, though, she starts to get used to her mother, and begins to understand her past.

Fit is the bigger personality in this story, as it is more from her perspective, and for the first third of the book, her personality is basically ‘be a brat’. She harbors a lot of resentment towards her mother (understandable) and lashes out in any way she can (particularly with her grandfather, which is shitty), and being contrary is second nature to her. River, meanwhile, is starting to adjust back to regular life, and has a new job, and she is proud of how her children have grown up, particularly Fit, but she still feels regret and guilt over it. She is hopeful of making amends with her daughter, and that is what Fit seizes on to manipulate her. Fit gets lost in the fame of it, in the possibilities that this new opportunity might bring her, and she doesn’t see that bringing the incident back into the light might be hurtful. There is a simultaneous tugging you feel between these characters, each with their own burdens and issues, and that, I feel was well done in the book. That and Fit’s well-fleshed out interactions with some characters were the highlight of the book.

However, the ending was a bit rushed and abrupt for my tastes. That, combined with a slow start, had me disengaged from the book plenty of times. There weren’t proper resolutions for some things, if we consider this to be a standalone. Overall, it is a good emotional read, but plot-wise it felt lacking.

Received an advance reader copy in exchange for a fair review from Flux, via Netgalley.