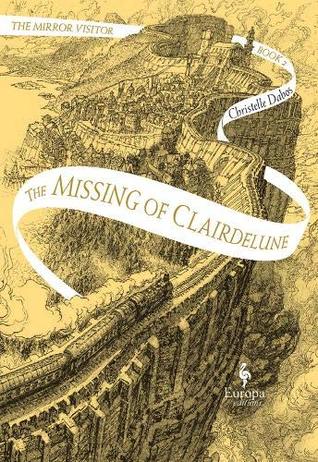 The ​Missing of Clairdelune by Christelle Dabos
My rating: 5 of 5 stars

When our heroine Ophelia is promoted to Vice-storyteller by Farouk, the ancestral Spirit of Pole, she finds herself unexpectedly thrust into the public spotlight and her special gift is revealed to all. Ophelia knows how to read the secret history of objects and there could be no greater threat to the nefarious denizens of her icy adopted home than this. Beneath the golden rafters of Pole’s capitol, Citaceleste, she discovers that the only person she may be able to trust is Thorn, her enigmatic fiancé. As one after another influential courtier disappears, Ophelia again finds herself unintentionally implicated in an investigation that will lead her to see beyond Pole’s many illusions to the heart of the formidable truth.

While the first book was more about introducing us to the world of the Arks, and specifically the Pole’s world of politics and infighting, this book makes the mystery of the book take center-stage. Ophelia, who has to now officially enter the court for her protection, is initially relegated to being a Vice-Storyteller to Farouk, the family spirit of the Pole. She is then involved in investigating the incidents of missing people from Clairdelune, which was supposed to be the most secure place on the Pole. During all this, her allies are solidified, but there is the question of Thorn, who seems oddly sincere about mending their partnership; Ophelia, however, wants to keep her place of her own accord, and not through him so there is expected friction between them.

This book takes us closer to Farouk, whose memories are revealed little by little through the ‘Fragments’ sprinkled throughout the book, giving us more information about the Book and what God is and who he was to the family spirits. Ophelia may have been brought to the pole to facilitate the reading of Farouk’s Book, but it seems someone doesn’t want that to happen. With months to go until the wedding, she is in danger, and being in Farouk’s favor is her best option. Unfortunately, the fickle and forgetful family spirit is also someone who scares Ophelia very much; however, we see a bolder side to her in this book. In the previous, she was assertive, but it was of a quieter sort, and here we see her being more proactive, perhaps because of all that she went through previously.

Thorn, meanwhile, is still basically running the Pole and scolding Ophelia whenever he can, and his secretive nature means she still can’t trust him, particularly after what she learned from the end of the last book. However, here she gets a better understanding of his situation, and he himself starts to soften towards her, so it is the start of a fragile friendship. Them basically being partners in a mystery case was delightful to watch. Other character interactions also get more meaningful in this book, more so because of the change in Ophelia; Berenilde is kinder towards her, and actually apologizes for all that she did. Her family is also visiting for the wedding, so Ophelia is now on the brink of a decision, as to how she wants to proceed with her life. After all, if you can face a family spirit boldly, you can probably be more assertive towards your mother!

As for the world – it was amazing enough in A Winter’s Promise, but now? Delving into the Book, discussing the Doyenes of Anima, and the introduction of the personal threat to Ophelia, as well as the hints of the mysterious LandmArk; it is a more involved world. Additionally, throughout the book, the author hides clues very well such that minor things mean something major later on. That coupled with the mystery made this for such an engaging book, that I practically read this in one stretch. Like, I didn’t even stop to nap during this 500+ page book – it was a ride from start to finish and I was so engrossed I barely remembered to eat and drink! It perfectly manages the balance between descriptive writing and plot progression, keeping you on your toes with its pace but also allowing for the world to expand in your mind. The ending brought a lot of ‘WTF’ moments, and with that cliffhanger-ish climax, the next book really can’t come soon enough!

Received an advance reader copy in exchange for a fair review from Europa Editions, via Edelweiss.