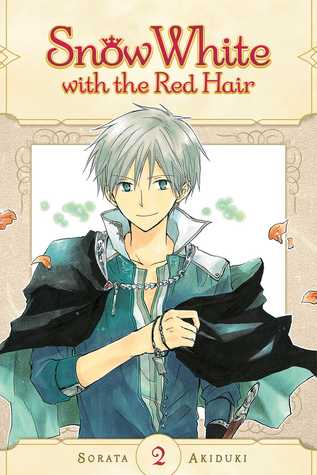 Snow White with the Red Hair, Vol. 2 by Sorata Akizuki
My rating: 4 of 5 stars

Shirayuki begins her duties as a court herbalist apprentice in the castle, but her mentor is a bit odd. He’s quiet, shy, moody and…a child? Her first official duty is to accompany the prince to help quell an illness going around one of the forts that house Clarines soliders. Will she be able to discover the cause of the outbreak in time?

This installment introduces us to two new characters – Ryuu, and Izama, and has Shirayuki assigned her first official duty. Ryuu’s characterization and Shirayuki being immediately awed and protective of him was sweet, and it is a testament of Shirayuki’s characterization how she can be loving and yet firm. When she and Zen encounter an outpost that is afflicted by some illness, she throws herself into her job, earning the admiration of everyone there, and also Zen, who is obviously exasperated by her workaholishness (he has no room for complaint, though). They are coming closer to each other, as seen in the scene where she reads about all the poison training he underwent, and him assuring her right before she is to speak to his older brother.

Speaking of Izana, he definitely makes you want to reach into the manga and slap him once or twice, for being rude to her; even though from his standpoint it feels reasonable to suspect a foreign girl suddenly gaining close access to the second prince, he didn’t need to be so insulting about it! And may I say I keep loving the art of this series – seeing Zen and co in their formal attire, as well as all the little details in the clothes of the characters is a delight!

Previous book in the Akagami no Shirayukihime series