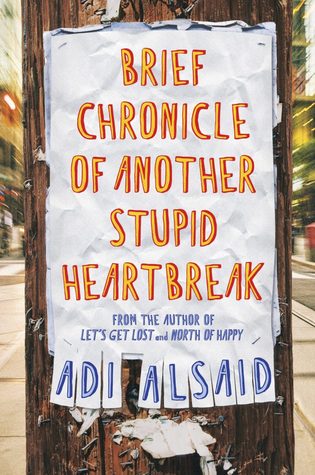 Brief Chronicle of Another Stupid Heartbreak by Adi Alsaid
My rating: 3 of 5 stars

The summer after senior year is not going as eighteen-year-old Lu Charles expected: after her longtime boyfriend unexpectedly breaks up with her, Lu can’t write a single word, despite the fact that her college scholarship is tied to her columnist job at hip online magazine Misnomer. Then, she meets Cal.

Cal’s ever-practical girlfriend Iris is looking ahead to her first year of college, and her plans do not include a long-distance boyfriend. When Lu learns that Cal and Iris have planned to end their relationship at the end of the summer, she becomes fascinated and decides to chronicle the last months the couple will spend together.

The closer she gets to the couple, the more she likes them, and the more she wants to write about them. The summer unfurls, and Lu discovers what it really means to be in love. On the page, or off it. The book is touching exploration of love and how it shapes us both during a relationship and after it has ended.

An exploration of romantic love and the longevity of relationships from the point of view of a young adult, this book would have been much more enjoyable if not for the length. Lu, freshly dumped, is suffering from writer’s block and is unable to write anything for her love and relationships column, which is also her ticket to getting a scholarship to college. She is understandably stressed and when she happens upon Cal’s and Iris’ breakup, she suddenly finds inspiration for what her next article should be, and hopes analyzing their decision to have a timed breakup will help her understand her own heartbreak.

Lu’s main problem is, she can’t bring herself to write anything and her procrastination lasts for like 300+ pages, which can be very frustrating for a reader, even if it is relatable from the point of view of a master procrastinator. I think a part of me gritting my teeth through some parts was because I was suddenly having flashbacks to all the times I had backed myself into a corner because I just couldn’t finish a task. Anyway, surprisingly for me, the romance was the highlight of the book; I should also make clear which romance I am talking about. It is Lu falling in love with the ideal that Cal and Iris represent to her.

She is pretty much in love with their love, and she vacillates between figuring out her own relationship with Leo and basking in the comfort she finds with them.

The chemistry between the three of them is amazing, and she fits in with them both individually and as a trio. But as the days go along and she gets in deeper, she is ignoring everything else in life for that sole obsession. Her friendship with Pete gets sidelined, her mother worries about her, her editor is giving her second and third chances she isn’t taking, but it finally takes her talking to a third-party someone about it that she realizes she wasn’t approaching the situation with the right mindset.

The message is optimistic in tone, but I just wish it didn’t take that long to arrive at it. The start and the middle were nice to read, with how Lu was enjoying her time getting to know them, but by the last quarter, it gets tiresome waiting for a resolution. It doesn’t help that it does go the love triangle route, too. Ultimately, these were the things that had me dropping the rating from an initial strong 4.

Overall: a sweet and optimistic book about love, but it could have done with a shorter length.

Received an advance reader copy in exchange for a fair review from Inkyard Press, via Edelweiss.