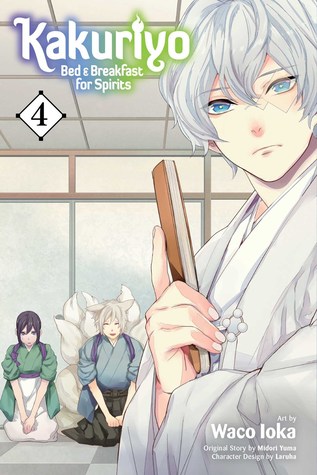 Kakuriyo: Bed & Breakfast for Spirits, Vol. 4 by Midori Yuma
My rating: 5 of 5 stars

Faced with the choice of being married to a strange spirit or being made into dinner, Aoi creates a third option for herself!

Aoi Tsubaki inherited her grandfather’s ability to see spirits—and his massive debt to them! Now she’s been kidnapped and taken to Kakuriyo, the spirit world, to make good on his bill. Her options: marry the head of the inn her grandfather trashed, or get eaten by ayakashi. But Aoi isn’t the type to let spirits push her around, and she’s determined to redeem her grandfather’s IOU on her own terms!

Aoi is finally ready to open her restaurant on the grounds of the Tenjin-ya inn, but not everyone is as excited about it as she is. Some of the chefs of the main restaurant are doing everything they can to destroy her business before it even has a chance to start! Aoi is determined to keep going, but her detractors are deadly serious about stopping her.

This volume has Aoi putting the finishing touches on her restaurant opening, and I was so here to see my girl flourish! She’s settling in well at the inn, with most of the staff helping her out and delighted to get to eat her nourishing food. But the main chefs aren’t pleased with her, and while they are resorting to pranks to undermine her, there is also a threat out against her. Odanna takes her out for the star festival, and we to see it celebrated in Kakuriyo, and with Ginji accompanying them, we also see the adorable dynamic between him, Aoi and Odanna. Ginji shows a mischievous side, using his shape-shifting to his advantage, and I wasn’t immune to him being so cute! Aoi is still being underestimated, mostly because she is human, but her being Shiro’s grand-daughter (we get more anecdotes about him, btw) and Odanna’s bride (seems the media haven’t gotten the memo about her bet) also gives her some status among the ayakashi. Aside from the plot, the amazing parts were the scenery of the star festival, as well as the delicious food mentioned and showed (made me a little hungry, tbh). I felt like this volume was a nice mix of aesthetics and plot.