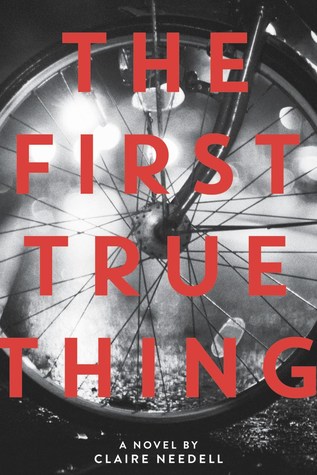 The First True Thing by Claire Needell
My rating: 3 of 5 stars

In the two weeks since her drunken bike accident, Marcelle has been forced to look deeply at her own life. She’s clean and sober now, attending a tough-love version of after-school rehab, and barely hanging out with her user friends. Then one night she gets a mysterious text from her best friend, Hannah, asking Marcelle to cover for her.

It’s a small, simple lie. But Marcelle learned in group therapy not to enable her drug-using friends. One lie could lead Marcelle back to a dark, dangerous place. But it’s Hannah: beautiful, messed-up, in-deeper-than-anyone-knows Hannah. So Marcelle gives in.

The next morning, Hannah is missing. Marcelle was the last one to hear from her . . . and now she’s lying to everyone—her parents, Hannah’s mom, and Hannah’s troubled boyfriend. How long can Marcelle go on before she admits to herself what she has to do? If she comes clean about what she knows, can she save Hannah?

The story of The First True Thing, at its core, is about a girl who has to overcome peer pressure to do the right thing. Marcelle is in recovery after an accident when she got drunk and nearly died; now she is the last person who her friend Hannah had texted before disappearing. Marcelle, while still only a couple of week sober, and in a therapy program that stresses her out, is also worried about Hannah and conflicted as to whether it would be better to stay silent or to speak up.

There are two major things going on in Marcelle’s life: her recovery and her friend’s disappearance. While technically this is not a mystery, Hannah being missing has a lot to do with how Marcelle is coping. Her therapy people say that Hannah is inconsequential to her mistakes and her recovery, but as we get to know Marcelle, we see how much of her friendships and her life was about them engaging in drug and alcohol abuse. So much so that helping efforts to search Hannah could destroy her life, as well as those of everyone in her friends circle; this constant struggle in her mind plagues Marcelle throughout most of the book. I mean, yes, the simplest thing was that Marcelle should have told what she knew, consequences be damned, but the crux of this book was that why that wasn’t so simple.

One thing that the book tried to do, and I feel didn’t end up doing it well was linking the process of Marcelle’s therapy to the past regarding Hannah. Marcelle finds her group therapy a different version of the same nonsense in her friends group – the posturing, the mind games, the apparent hierarchy. It wasn’t until the end that someone was like – this peer group therapy sounds like an extremely bad idea. Some of the language used within the group itself was terrible, and there were times like – they shouldn’t be talking to any recovering addict like that! – and I dunno if that is the norm or whether there was a need for me to give content warning, so I thought better to include that here instead of above. The ending was unexpected, not in the mystery itself (because I guessed that within the first quarter of the book itself), but how it came out.

Overall, a good exploration of the problems of addiction in teens and how it presents different challenges.

Received an advance reader copy in exchange for a fair review from HarperTeen, via Edelweiss.