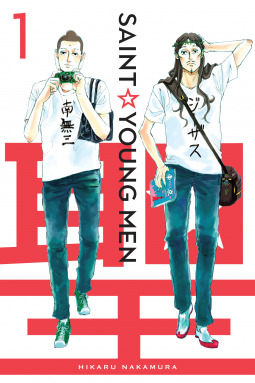 Saint Young Men by Hikaru Nakamura
My rating: 4 of 5 stars

There are saints living in Tokyo, Japan: Buddha the Enlightened One and Jesus, Son of God. After successfully bringing the previous century to a close, the two share an apartment in Tachikawa while enjoying some well-earned time off down on Earth. Buddha pinches pennies like a typical neighborhood housewife, while Jesus is prone to making impulse buys. Read all about the saintliest duo’s carefree days in Tachikawa …

A slice-of-life manga with a unique premise, Saint Young Men delivers a laugh-out-loud comedy that is good-natured and secular, despite centering two major religious figures. Jesus and Buddha are both taking a well-deserved vacation in Tokyo, living as roommates, hiding their divine selves behind the personas of Hippie and Man Perm respectively. With a clean artwork, and numerous gags on each of their presences, this one had some excellent jokes on Buddha’s ascetic lifestyle or Jesus’s miracles, while placing them in the 21st century. With Jesus being a impulsive spendthrift and Buddha being a cautious spender, their duo makes for an interesting living situation. Then there are also gags on mythological canon, like why Jesus walked on water instead of swimming, or how Buddha feels about roller coasters, or a yakuza member confusing Jesus for the scion of some major crime family, or just simple jokes about them being more than two millenia old. Their duo even does a comedy act, takes part in a shrine festival and engages in some new hobbies. And the best part is, you don’t even need to be fully familiar with the religious references as there is a glossary at the end. Readers might even spot pop culture references like the one to Death Note, or about Jesus looking similar Johnny Depp. Overall, it is entertaining, refreshing and just adorable.