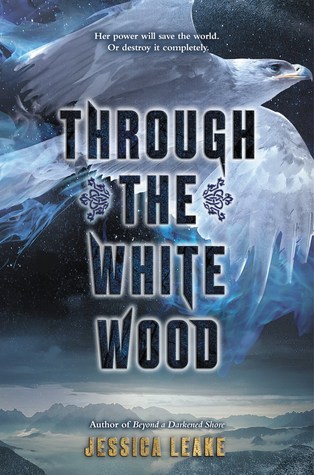 Through the White Wood by Jessica Leake
My rating: 3 of 5 stars

When Katya loses control of her power to freeze, her villagers banish her to the palace of the terrifying Prince Sasha in Kiev.

Expecting punishment, she is surprised to find instead that Sasha is just like her—with the ability to summon fire. Sasha offers Katya friendship and the chance to embrace her power rather than fear it.

But outside the walls of Kiev, Sasha’s enemies are organizing an army of people bent on taking over the entire world.

Together, Katya’s and Sasha’s powers are a fearsome weapon. But as their enemies draw nearer, will fire and frost be enough to save the world? Or will Katya and Sasha lose everything they hold dear?

While the author’s first book was a good and interesting read, this one fell flat for me. The story of a girl with frost powers in her veins, who is being sent to the Grand Prince of Kiev to deal with, the plot feels similar in structure to Beyond the Darkened Shore in that it has two supernatural people chosen for a prophecy. Katya, much like Ciara, does not know the reach of her powers, and moreover, she is afraid to use them after an accident had her killing a significant part of her village. Vladimir, aka Sasha, the prince, is a victim of bad propaganda, and she initially fears him, and later thinks he cares only for her powers. Together, though, they have to unlock their powers and work together to defeat his enemies.

Now, a large part of the reason why I didn’t like this book as much as I hoped to was the fact that even with an interesting setting and storyline, it fails at engaging the reader. The pacing is glacial, and takes weird detours that don’t do much for the plot; I pretty much speed-read the last quarter of the book because my patience was gone by that point. The dialogue of this one also comes across as more stilted and formal, and the character interactions suffer as a result. I was also confused at one point about which language they were supposed to be speaking in Constantinople! The romance particularly lacked any chemistry, and it just felt forced; they are opposite powers so obviously they just have to complement each other! Katya’s initial hesitance to him, as well as her continued fear of pursuing anything with him is barely resolved at the end, and Sasha takes up like a cookie cutter role of being the love interest.

The few good things about this book is that the base was actually good, and the historical aspects included were interesting; I just wish it had did more with those in the plot itself than being decorative elements. Oh, and Lief and Ciara make an appearance in the book, which was delightful in a way; they had a presence much more that the actual protagonists of the book, to be honest! The big fight at the end was a bit thrilling but since I had lost patience with the book by that time, I didn’t enjoy it well enough.