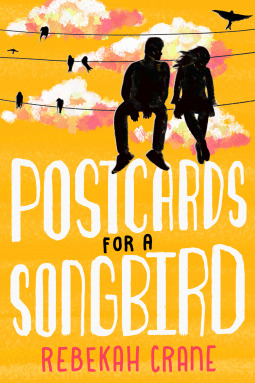 Postcards for a Songbird by Rebekah Crane
My rating: 2 of 5 stars

Everyone eventually leaves Wren Plumley. First it was her mother, then her best friend, and then her sister. Now living with only her cop father and her upended dreams, Wren feels stranded, like a songbird falling in a storm.

When Wilder, a sickly housebound teen, moves in next door, Wren finally finds what she’s always wanted—a person who can’t leave. But a chance meeting with Luca, the talkative, crush-worthy boy in her driver’s ed class, has Wren wondering if maybe she’s too quick to push people away. Soon, Wren finds herself caught between the safety of a friendship and a love worth fighting for.

Wren starts to dream again. But when postcards begin arriving from her sister, Wren must ultimately confront why her mother left fourteen years before and why her sister followed in her footsteps. For her new life to take flight, Wren will have to reconcile the heartbreaking beauty of lost dreams and the beautiful heartbreak of her new reality.

Postcards for a Songbird is about a teen’s struggle through abandonment issues and learning to rely on others. Wren has walls around her heart, built to protect her from the pain of losing people. First her mother abandoned her in childhood, and then her sister ran away a month ago. So at the start of the book, she is in a bad state. To encourage her to go out more, her father signs her up for drivers ed classes, and she meets a boy who reminds her very much of her sister’s sunny radiance. As she navigates this first love, she also has to find out what made her sister leave and where she is now.

My principal quibble against this book is that for all its emotionally-charged arc and character-driven development, I didn’t feel a thing. Zilch! First of all, her sister is the Manic Pixie type who will romanticize Anything, and it is never clarified if she got any professional help for her issues. Secondly, Luca, who is the insta love boyfriend Wren gains, is quite pushy and his behaviour is more creepy than flirty, what with his constant getting into her space, and chasing her even though she puts up a wall between them.

Heck, there is even a line where he says he’s been patient enough and he is going to (not ask, going to) kiss her. He tells her he is going to let her decide if they want to be a thing, and then the next day he pushes her for an answer anyway and dismisses it when she calls him out on it. His character is better in the second half of the book, but the first half had me like ‘why is he is the love interest?’

Next there is the way these teens speak. Wren and her friends always speak in metaphors and overworked Romantic language, as if they are constantly standing in an open mic night. This was supposed to be them ‘not conforming’ or something. *eyeroll* Most of the story is about Wren ruminating about her life, her memories with her sister, and what she thinks about love and stuff, so I get that that may be more introspective and purple prose-y, but why are they talking in the same kind of dialogue FFS? Oh, and I want to have a conversation with her dad for keeping that from his high-school-aged daughters; the way the secret was hidden I was thinking it was something much worse. And don’t even get me started on Wilder and how much prominence he is given in the blurb considering his role in the book!

Overall, a frustrating superfluous read that was only bearable because it was short.

Received an advance reader copy in exchange for a fair review from Skyscape, via Edelweiss.

Other books by Rebekah Crane

2 thoughts on “ARC Review: Postcards for a Songbird by Rebekah Crane”