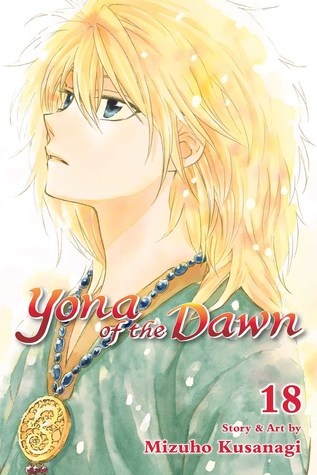 A Kai Empire soldier fatally strikes Zeno, but he doesn’t die! Yona and her friends are shocked by the Yellow Dragon’s power as well as what he reveals about both his past and the Crimson Dragon King…

This volume is devoted to telling Zeno’s story, recounting his past before he met the current dragons, as well as tells us the story of the original Crimson Dragon King and his warriors. While the other dragons have had difficult childhoods, Zeno’s life, too, has been plagued by loneliness, loss and conflict which he has had to be part of. The story-line is, in short, quite heart-breaking, but also has good moments, like Zeno’s love for his fellow dragons, meeting them when they were younger, as well as his partner. There were some moments I did cry, though, and it goes to show how much Zeno’s character was fleshed out, because it hit on all the right spots. I can’t say anymore because *spoilers* but I loved this arc, even if it had little of the actual group.