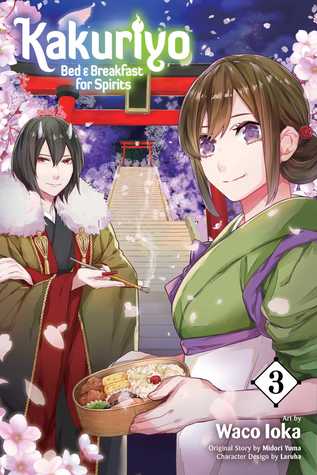 Kakuriyo: Bed Breakfast for Spirits, Vol. 3 by Midori Yuma
My rating: 4 of 5 stars

Faced with the choice of being married to a strange spirit or being made into dinner, Aoi creates a third option for herself!

Aoi Tsubaki inherited her grandfather’s ability to see spirits—and his massive debt to them! Now she’s been kidnapped and taken to Kakuriyo, the spirit world, to make good on his bill. Her options: marry the head of the inn her grandfather trashed, or get eaten by ayakashi. But Aoi isn’t the type to let spirits push her around, and she’s determined to redeem her grandfather’s IOU on her own terms!

Aoi wasn’t the only orphan her grandfather Shiro took in. Before she went to live with him, he rescued the spider demons Akatsuki and Suzuran and put them to work as unpaid servants! Now Aoi is questioning everything she thought she knew about her upbringing. What was Shiro up to? And more importantly, does that make the spider demons family?!

This volume focused on the spider demon siblings, Suzuran and Akatsuki, and the Aoi’s grandfather’s relation to them. The siblings are having a fight because Suzuran wants to go to Utsushiyo even though Shiro is dead, and Akatsuki is dealing with his own feelings over that grief. Meanwhile, Aoi’s childhood (before Shiro took her in) is once again mentioned, and it is hinted at that Odanna and Ginji know something about something she has forgotten. But mainly, I was invested in the complicated feelings Aoi has about her grandfather now, knowing he had surreptitiously prepared her for dealing with ayakashi without telling her so, but also being the reason she is in Kakuriyo trying to pay off his debts (also, she makes a decision about it for once and all). The world, too, gets a bit wider as we learn a little more about the travel between them.

Previous volume in the Kakuriyo series