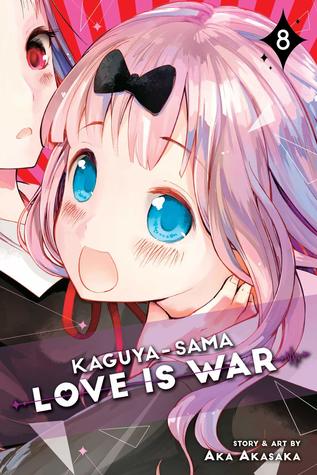 Will Miyuki’s hormones keep him loyal to Kaguya or lead him astray? Meanwhile, Miko is interpreting everything she observes in the student council as risqué. Then, a shojo manga makes everyone romance crazy. Somebody actually, finally asks somebody out! And Kaguya and Miyuki accidentally get locked inside a room together…

As the blurb suggests, the chapters in this volume are a bit all over the place. The only common thread connecting the story is the Ino, and the last chapter, as she tries to make sense of what she is seeing in the student council – twice finding Miyuki and Kaguya in compromising positions, once finding Chika being held while they are taping her mouth, and other random and bizarre occurrences from the previous volume. The situations are hilarious by themselves, but they read like a series of one-shot extra chapters, often with some characters *cough*Ishigami*cough* going out of character (seriously, the guy who creepily told Chika he remembers her perfume smell as any sort of authority on girl psychology is a reach) and the ‘shojo-manga-vision’ chapter being overlooked as a potential arc. And its not disparate like it was in the earliest volumes, where even though they had different stories in each chapter, it still connected. Now, it feels like it is just circling around the same thing, like Kaguya still vehemently denying that she is not in love.