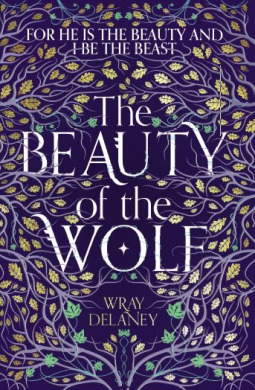 The Beauty of the Wolf by Wray Delaney
My rating: 3 of 5 stars

In the age of the Faerie Queene, Elizabeth I, Lord Francis Rodermere starts to lay waste to a forest.

Furious, the sorceress who dwells there scrawls a curse into the bark of the first oak he fells:

A faerie boy will be born to you whose beauty will be your death.

Ten years later, Lord Rodermere’s son, Beau is born – and all who encounter him are struck by his great beauty.

Meanwhile, many miles away in a London alchemist’s cellar lives Randa – a beast deemed too monstrous to see the light of day.

And so begins a timeless tale of love, tragedy and revenge…

Note: this is not a YA book, it is an adult fiction retelling.

I have read many retellings of Beauty and the Beast, in various forms, but this one may be singularly unique. The story is narrated in turns by the sorceress, the beauty and the beast – and it tells the story of a boy, Beau, created for the sole purpose of fulfilling a curse, and a girl, Randa, who has a beastly form due to her parents’ alchemical experiment to revive her, both entangled in the scheme of a sorceress who sought vengeance on the Beau’s tyrannical father. Conceptually, it is an edgy gothic fairytale style story, with very flowery language and a winding plot. I wouldn’t say it to be feminist in its ideas, but it is anti-patriarchial (and a bit of religious criticism thrown in) and pro-nature in what it tries to discuss.

Beauty of the Wolf takes the blocks of the original tale and reassembles them in a pattern that has key moments, but used entirely differently. Like, the theft of the rose happens quite later on, but Beau is still taken as a collateral for it. The ‘curse’ of becoming a beast is cured but through the help of the King of Beasts, not by true love’s kiss. And the beast is not entirely a person, but a concept that is brought up, and also both the characters. Beau’s aversion to his own beauty, his despair over being an instrument of a curse, and Randa’s stalker moves are quite different from what you would expect of traditional fairy tale protagonists. The sorceress herself, starts from a place of justice, but she is too Dramatic and instead of just getting it over with, she goes the extra mile of making an elaborate curse akin to prophecy which sweeps all the other characters into its net.

Now, you may be wondering if it is what I usually seek in retellings – dark themes, unique plot ideas, complicated characters – why would I give it only 3 stars? Well, that’s because of the writing itself – it was too flowery and archaic for my tastes (even though it fits), and only makes the plot drag along. Also, what is the author’s aversion to using commas? I had to read so many sentences twice because I couldn’t figure out what was being said, clearly. Between the euphemisms and the cringe-y sex scenes (there are many, mind you), the story kinda flounders, trying to hook you into it. The middle practically stalls with nowhere to go, as Beau tries his hand at being an actor (which involves a good bit of cross-dressing) while Randa is off brooding and the Sorceress is trying to get that little scrap from her petticoat back (it is never made clear why it was important for her to do so, and why time was getting its hold on her).

Overall, as a story I would say it was definitely something fresh (ironic, considering the language and the setting) but the writing may be appealing to only a niche audience.

Is it diverse? There are a couple of black (one of whom is also genderfluid) and gay characters among the secondary characters.

Received an advance reader copy in exchange for a fair review from HQ, via Netgalley.

2 thoughts on “ARC Review: The Beauty of the Wolf by Wray Delaney”