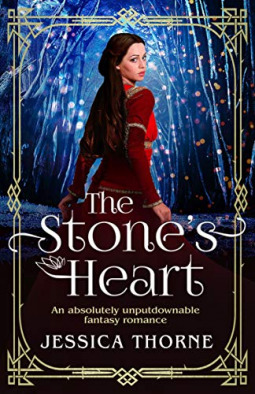 The Stone’s Heart by Jessica Thorne
My rating: 3.5 of 5 stars

Something evil is gathering power in the kingdom. It knows the secrets in your heart, and nobody is safe…

Petra Kel – young and headstrong – has been named General of the Queen’s Guard. But while Petra’s head may be in rebuilding the war-torn kingdom alongside her childhood friend Queen Belengaria, she left her heart miles away in their homeland, the day she turned her back on the only man she ever loved and fled.

But then Petra’s past – in the form of Bel’s roguish brother Zander – comes crashing in, just as rumours of dark magic begin to swirl at court. Petra can’t afford to be distracted… but the unfinished business between herself and Zander is like a vice upon her heart.

When evil takes hold of the kingdom and threatens Bel, Petra is forced to make the impossible choice between love and loyalty. And will the insidious magic of the Stone’s Heart reveal the heart-breaking reason why she left Zander behind all those years ago?

The follow-up to The Queen’s Wing centers the story on Petra, Bel’s bodyguard who has now been made General, while also having Bel as a second POV. In the aftermath of the Gravian war, Anthaese rebuilding efforts continue, and they are all looking forward to Bel and Con finally being wed; the presence of Bel’s older brother Zander adds a complication, though, as he is entangled in Imperial schemes of expansion. Meanwhile, a strange disease is spreading, an ancient myth maybe reawakening and Bel and Petra have to investigate conspiracies regarding the Mecha. Petra’s personal conflict stems from her being practically an exile from her own home planet, and her feelings about Zander that threaten to impact her duties.

The book has a lot of plot going on, and several things in play. There are diplomatic complications with Zander’s arrival (more about the people that come after him than Zander himself), the rebuilding of a war-torn planet being a distraction for something else to rise, the Rondet and Bel’s relationships with this new place she calls home, plot arcs about loyalty and belonging, and the love triangle between Pet, Zander and Teel. Now, it takes a lot of time to build up to those things in a meaningful manner, which makes the first half slow enough that it feels like slogging through. Moreover, I felt at times it was going over some established ruts in the plot, increasing its length unnecessarily.

However, I loved the second half better! It made up for some of the lag, delivering on some built-up tensions, and nicely executing Bel’s particular issue. Petra’s growth throughout the book is also subtle, where she realizes what she really wants is not to be just a soldier and bring honor to her family name. I did feel, though, that the love triangle had more potential than what it ended up as – Teel definitely felt like an ex to Zander and there were enough hints in place to suggest both of them being bisexual. However, considering that the story about the Imperial conspiracy is barely begun, I have hope that the next book will resolve that in a more satisfactory manner.

Overall, a good sequel that tells the story just as well from another character, but it has a slow first half.

Received an advance reader copy in exchange for a fair review from Bookouture, via Netgalley.

One thought on “ARC Review: The Stone’s Heart by Jessica Thorne”