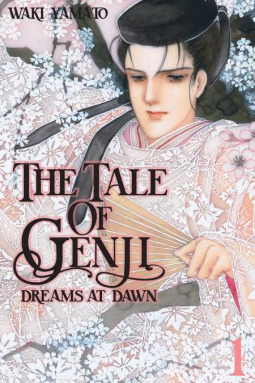 The Tale of Genji Volume 1: Dreams at Dawn by Waki Yamato
My rating: 4 of 5 stars

First published in the 1980s and 90s, Waki Yamato’s renowned adaptation of Murasaki Shikibu’s 11th-century literary masterpiece is still gorgeous to behold and is considered one of the greatest novel-to-manga adaptations of all time.

Prince Genji falls in love with his stepmother, and so begins a forbidden love that will make him suffer his whole life. Genji’s love story involves him falling for many women and begins with his love for Princess Fujitsubo—his father’s wife and his stepmother. And Genji will cross that line which he should never cross.

The English-language digital debut of The Tale of Genji: Dreams at Dawn coincides with the opening of the exhibition “The Tale of Genji: A Japanese Classic Illuminated” at The Metropolitan Museum of Art in New York City—featuring original genga artwork from this manga—in Spring 2019.

The reputation of the Tale of Genji precedes it, having being (questionably) considered the first novel written and a record of life in the Heian period in Japanese history, and has been adapted/translated by many. At its heart, though, it is a story of a man whose problems in love arise from his longing for one particular woman and his search for a woman who could take her place in his heart. Now, I wish I could be entirely serious considering that this a classic novel and deserves every amount of gravitas, but this particular adaptation is a shoujo manga which was perfect in a way because of the Romantic nature of the story, and I cannot get by with just a perfunctory review of the book. I’ll tell you why.

First of all, let me just be clear – I don’t like Genji. The author also makes a similar remark in her notes, saying how she had to make herself like Genji because he is the protagonist, but I disagree mainly because protagonists don’t always have to be liked and this is not the 80s anymore. Genji is the shining prince (it is literally his name, too!) and the story starts much before his birth, with his mother, who was a low-ranking lady in court who caught the eye of the Emperor and became his consort. There are some supernatural elements involved, but anyway her health declines and she dies when he is quite young and his father remarries, some years later, a young girl called Fujitsubo who resembles his deceased wife. Fujtisubo is close in age to Genji (14 to his 9) and close to him in a motherly/sisterly relationship. However, when he comes of age (at 12, like WTF) he cannot see (like, physically see, not meet) her anymore and as the years pass, his childhood adoration turns to romantic love.

But he is also married off (at 12, which again WTF) to Aoi (who is 16), who is cold towards him mainly because she doesn’t know what to do with a young groom (this is a warning against child marriage, if anything) and he finds his ‘joy’ elsewhere in affairs with other elegant ladies at court, building a playboy reputation with his brother-in-law. He begins an affair with an older widow (and by older I mean she is 25 to his 17) Rokugo, and then a woman from other side of town, Yugao; the latter dies due to a supernatural case of jealousy in the former (IDEK it was so weird but I’ll take it because its the 11th century and ayakashi are a thing). He then finds a precocious 10-year old, takes her under his wing, and names her Murasaki (future bride I guess?) while searching for the Next Woman, even going so far as to woo a woman he has never seen just because he assumes she is an highly elegant lady. He also slips up and has a night of passion with his original crush and love, Fujitsubo.

Basically, it is a series of affairs that Genji has, while cheating on his wife (try wooing her for a change, dude!), and him falling in love and out of love, while yearning and hiding his feelings for Fujitsubo. It is as melodramatic as Genji deserves, and he single-handedly removes any need for drama from womanly jealousy because he is providing all of the drama this novel needs. Maybe the original tale was supposed to engender some compassion for Genji because of the yearning, but I am cynical millennial, so I am just vicariously enjoying all the ‘romance’. Genji’s one move is basically to charm the woman and then suddenly rip the blinds aside, so I don’t know if I could ever like him, either.

But it is a fascinating view into the life and customs of that time, and Waki Yamato does a great job of bringing it alive in her artwork. The character design is retro, obviously, but the background, the dresses, the glorious hair, the posing of the characters like they are in a woodcut artwork – it all fits the storytelling style and the era well. The art is brimming with beauty and romance, and I loved it for it. It also brushes aside and romanticizes all the things that Genji is doing wrong, but hey that’s what the story is about.

Overall, it is a great manga adaptation, especially if you are someone like me who always wanted to read it but balked at reading some dry translation of it.

Is it diverse? It is a Japanese classic, and is adapted by a Japanese mangaka!