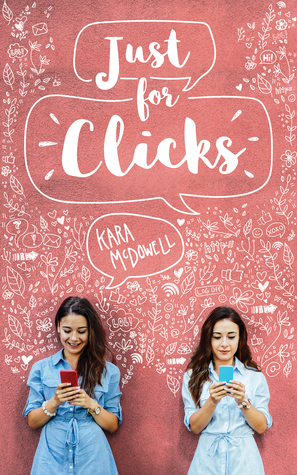 Just For Clicks by Kara McDowell
My rating: 4 of 5 stars

Mommy blogs are great . . . unless the blog happens to belong to your mom.

Twin sisters Claire & Poppy are accidental social media stars thanks to Mom going viral when they were babies. Now, as teens, they’re expected to contribute by building their own brand. Attending a NY fashion week and receiving fan mail is a blast. Fending off internet trolls and would-be kidnappers? Not so much. Poppy embraces it. Claire hates it. Will anybody accept her as “just Claire”? And what should Claire do about Mom’s old journals? The handwritten entries definitely don’t sound like Mom’s perfect blog persona. Worse, one of them divulges a secret that leaves Claire wondering what else in her life might be nothing but a sham . . .

Just for Clicks is a light breezy book about one of a set of twin influencers, whose whole lives have been online since they were born, and who is feeling stifled by it. Claire and her sister Poppy established their own brand with a vlog, as an offshot from their mom’s fashion and life blog, but now Claire doesn’t feel as enamored by the lifestyle. She is tired of the constant lack of privacy, the invasive nature of followers, and while she hates it all, she goes along because that is her family business. Finding one of her mom’s journal gives her more insight into her mother’s life, and consequently hers and her figuring out what she thinks of their family’s online presence.

While this book is a contemporary romance in a way, it is also a lot about family. Claire feels like a misfit in hers, and she has problems with the way her life and relationships are forever marked by picture perfect moments for public display. The line between keeping memories and sharing with the world is a topic discussed, as well as the lack of privacy suffered by those who have big online presences. Poppy’s sister loves the life, however, and Claire feels like she has to do it so that her sister can have the life she likes. A major theme that arose out of this is what online presences mean for a person: for Claire, it is about being allowed to tell her story, not an image that people can see at as a brand. It was what draws her to Rafael, initially – the fact that he wasn’t aware that she was famous, and so she gets an even footing with him, knowledge-wise.

The writing style and tone is nice and light, though it still deals with some tough things. Claire’s voice comes out perfectly well – it doesn’t sound like a caricature of a ‘not like other teen’ who just ‘hates social media’ but a person with her own reasons for liking and disliking various aspects of it. She has her insecurities that are worsened by the trolling and the bullying, which she finds a way through. I must admit, though, that the ending felt a little too easy for what was being built up – it felt like it had to go some way and wrap it up, so the characters were suddenly more mature and understanding after finally sitting down and talking about stuff; the issues weren’t just about misunderstandings or not seeing things, they were deeper. On another note, Rafael’s digital ignorance was taking it a bit too far – he is still a Gen Z kid, whichever country he was in, okay? Being in rural India for 14 months doesn’t entirely mean you are living under a rock, especially when in some cases he was using pretty recent slang.

Overall, it is a quick and entertaining read, delving into online fame and the trials of being famous, but also paying attention to characters and relationships.

Received an advance reader copy in exchange for a fair review from Amberjack Publishing, via Netgalley.