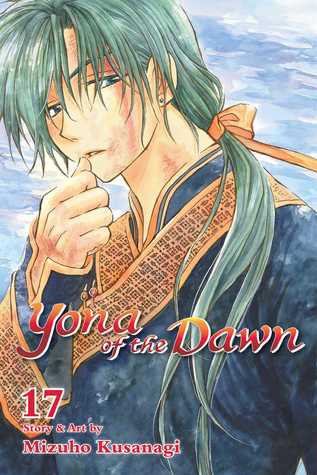 Yona of the Dawn, Vol. 17 by Mizuho Kusanagi

Yona and her friends leave the Water Tribe lands and meet a boy named Karugan in an Earth Tribe town near the nation’s border. When they cross the border to take him back home, one of the Dragon Warriors unexpectedly collapses!

Despite being the same length as always, this volume felt quite shorter than the others. Maybe its because not much and a lot of things happened at once. The Dragon Squad has reached a border village in Earth tribe territory, when they help out a kid from Kai who crossed over, to get back to his country. While there, they are, once again, coincidentally at the site of a battle (they NEVER catch a break, do they?) and the Dragons are falling ill; this added another layer of trouble for them. They are in another country, being distrusted by the people, and the Kai army is retaliating for the war, while three of their dragon fighters are indisposed. Hak is amazing, but come on, he has his limits, too. It pretty much ended on a big cliffhanger, and I am thinking we get Zeno’s backstory next.

Aside from that, another development is Yona’s thoughts about Su Won’s leadership – she had just witnessed firsthand how capably he has been managing the country. But this new war is making her think about what the kings owe to their subjects, as well as her father’s rule. I am hoping it may be an impetus for her to challenge Su Won, but the twist with regards to the Dragons’ powers makes me think the best time is now. Another great addition was the short story about Jae Ha’s childhood – as always, the Dragon kids never have a good one, with them usually being subject to their predecessors’ wrath. It’s a complicated relationship, as always, and is much upon how they are treated by their villagers, too. Seeing that, Jae Ha’s original reluctance to join Yona also comes into better focus. As always, an emotional and action-packed story from Kusanagi.