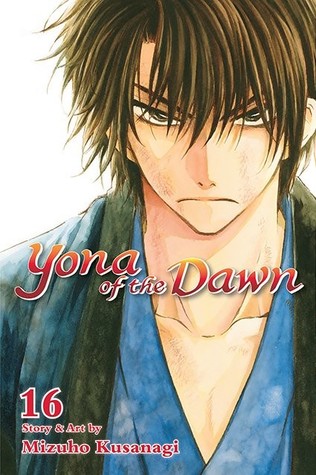 A large fleet of ships from South Kai heads to Sensui at drug trafficker Hyo’s behest. Will Yona and her friends be able to thwart Hyo’s nefarious plans and stop these enemy forces? And what will happen to Yona when an infuriated Hyo attacks her?

This was a pretty intense volume, and not just because there is a drug dealer backed by the enemy kingdom coming with a fleet to destroy the Dragon squad. The presence of Su Won, Yona and Hak in one place will obviously raise tensions, but now its not just them in the picture, but their allies, too. While Yona is working with Riri and Su Won to mount a defense at the shore, Hak, Ki Ja and Jae Ha attack the fleet; Yona is conflicted but still give backup to Su Won when necessary. Hak, however, has a much different reaction to meeting him, which I felt was a bit OOC for him (he wouldn’t show his emotions like that, is all I am saying). From the secondary characters, too, you see emotional reactions to the three of them being in the same place, like Ju Do being stricken with a small amount of guilt for having a hand in ousting Yona from the palace, to Jae Ha realizing that the young man he had befriended is Yona’s enemy. Riri, meanwhile, is also a bit conflicted about it, but she back Yona and stands up to her father – in a move that made me scream, “you go girl!”. There were, once again, hints that she has a crush on Yona, but I am not expecting it to go anywhere. Overall, an entertaining installment, and a good conclusion to the Nadai arc, but also a good build up to rising political tensions.