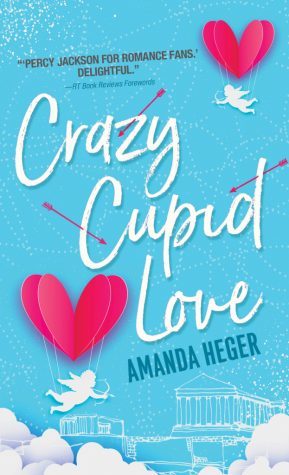 Crazy Cupid Love by Amanda Heger
My rating: 4 of 5 stars

Eliza Herman has spent years avoiding her calling as a Descendant of Eros. After all, happily-ever-afters are a myth. But when a family crisis requires her to fill in at her family’s Cupid-for-hire shop, Eliza finds herself enchanting couples under the watchful eye of her mentor, Jake Sanders.

After Eliza accidentally enchants Jake instead, they set rules to keep his arrow-struck desire at bay. But some rules are meant to be broken, and before long Eliza is rethinking her stance on true love…until they discover a conspiracy that could destroy thousands of relationships–including their own.

Note: this title is adult fiction, not YA fiction

In an alternate world where Cupids are known among the regular humans, Eliza Herman, an Erosian who quit being a Cupid has to become one again to help her family business from going under. Complicating matters is the fact that she accidentally enchants her childhood best friend, crush and current mentor, Jake, which means a sexual-tension filled working relationship at the least, and a new phenomenon where people’s enchantments are breaking down. Crazy Cupid Love may be best described as a rom-com-mystery, with a down-on-her-luck protagonist, a sexy love interest and some hilarious clientele.

There are three distinct storylines going on in this book – Eliza applying for a license and taking on clients to substitute for her dad who is recovering from a heart attack, her budding romance with Jake being complicated by the enchantment on him, and the weird phenomenon of enchantments breaking down, amidst an atmosphere of distrust towards Cupids and tight regulation of their work. The world that they live in has Erosians out and about doing their work, with consent, but other Greek Descendants living in hiding, and while they have a society of Descendants that collectively manages their matters, Erosians are sort of in the doghouse for outing themselves. This means strict rules about their work and more importantly, their working and personal relationships. Which is why Jake and Eliza have to try hard to not give into their respective feelings for each other (and also the classic unrequited crush scenario being actually requited), not until the illegal enchantment on him wears off. There are some intermittent chapters in first person from Jake that is pretty much a lot of him hiding his feelings from her, and not knowing what to do about it.

Meanwhile, Eliza has to deal with some interesting clientele, ranging from an old married couple to troubleshooting a sex robotMandroid (god, I loved that scene!) to getting two zoo animals together. Honestly, I would love a sitcom of just the rotating door of wacky client requests that come to her! But the story is about much more: Eliza’s arc is mostly to get over her fear of her own amazing powers (she is the strongest Cupid that they know of) and to believe in Love as a real thing (seeing the manufactured one a lot can disillusion you). And later, she is also working to uncover a conspiracy regarding the Descendant society. The last quarter of the book had a LOT going on, and it may have partly been my sleepiness (as I was racing to finish it before bedtime), but it was a lot of ‘WTF?’ for me.

The romance was cute in the start, with the misunderstanding between them leading to a lot of awkward scenarios, but also Jake trying and failing to restrain his flirting. Also Eliza is thinking he is not at all attracted to her, but he is trying so hard to not show it that he looks like he is sick. Then it built up sexual tension, and well, there are some steamy scenes, too. The later parts sort of fizzled out the romance, as they were involved in the conspiracy thing, plus another thing that caused a rift between them, which is why the epilogue felt a bit rushed when it came to the romance, but overall, it was a satisfactory ending to their story.

On the whole, a fun, charming and entertaining novel.

Received an advance reader copy in exchange for a fair review from Sourcebooks Casablanca, via Edelweiss.