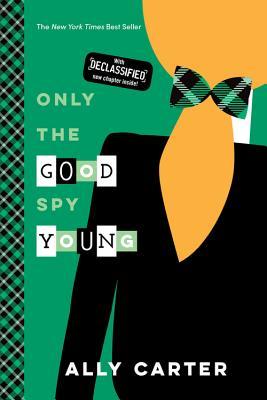 Only the Good Spy Young by Ally Carter
My rating: 4 of 5 stars

When Cammie Morgan enrolled at the Gallagher Academy, she knew she was preparing for the dangerous life of a spy. What she didn’t know was that the serious, real-life danger would start during her junior year of high school. But that’s exactly what happened two months ago when Cammie faced off against an ancient terrorist organization dead set on kidnapping her. Now the danger follows her everywhere, and even Cammie “The Chameleon” can’t hide. When a terrifying encounter in London reveals that one of her most-trusted allies is actually a rogue double-agent, Cammie no longer knows if she can trust her classmates, her teachers—or even her own heart. Now the Gallagher Girls must hack, spy, steal, and lie their way to the truth as they discover that the key to Cammie’s future may lie deep in the past.

Coming back to the GG series is always a dual emotion – I can see the books not being that great in hindsight, but if you ask the me 7 years ago, these books were awesome. And it is still amazing in that it is a light-hearted teen spy thriller, with the occasional mention of murder. Cammie is back at school after a disastrous winter holiday season in which she finds out that Mr Solomon has been declared a double agent, her life is even more guarded, and she still doesn’t know what value she holds for the Circle of Cavan. Compounded with that is the mystery of the new Cove Ops teacher, Edward Townsend, who seems more likely to investigate them and teach them, and Zach, who is helping Mr Solomon and keeping secrets from Cammie. The practical applications of their spy skills has gone on to more dangerous scenarios, like getting into Gallagher Academy’s most secure location, infiltrating another spy school, and getting out of combat situations. It still manages to maintain a layer of humor over this, as seen in their mission reports, but there is also a heightened sense of danger regarding their activities and the changed relationship between the girls. On the whole, a great installment in the series – with loads of drama, emotion, mystery and danger.

2 thoughts on “Review: Only the Good Spy Young by Ally Carter”