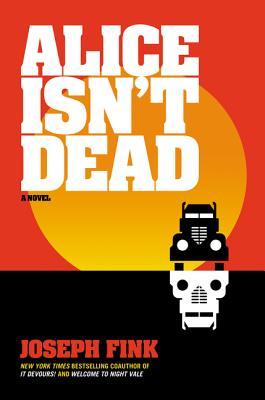 Alice Isn’t Dead by Joseph Fink
My rating: 4 of 5 stars

Keisha Taylor lived a quiet life with her wife, Alice, until the day that Alice disappeared. After months of searching, presuming she was dead, Keisha held a funeral, mourned, and gradually tried to get on with her life. But that was before Keisha started to see her wife, again and again, in the background of news reports from all over America. Alice isn’t dead, and she is showing up at every major tragedy and accident in the country.

Following a line of clues, Keisha takes a job with a trucking company, Bay and Creek Transportation, and begins searching for Alice. She eventually stumbles on an otherworldly conflict being waged in the quiet corners of our nation’s highway system—uncovering a conspiracy that goes way beyond one missing woman.

Why did Alice disappear? What does she have to do with this secret war between inhuman killers? Why did the chicken cross the road? These questions, and many more will be answered in Alice Isn’t Dead.

Alice Isn’t Dead is one of my favorite audio drama podcast, and naturally I was excited for a novelization of it. This novel is a different story from the podcast – well, at least, a few events in this happen differently – but leading to the same ending (whew!) as it. The story is about Keisha’s search for her wife across the highways of America, the wife whom she thought had died but who actually ran away and is involved in something far bigger than she could have imagined. Keisha’s first interaction with Alice’s world is when she sees a man-shaped monster kill and eat a man outside a restaurant, and then begins the chase, the mystery, the question of what these monsters are, how have they been not noticed, and how to defeat them.

I don’t want to go into spoiler territory, so all I’ll say is that overall you can expect the same kind of story as was in the podcast, but with some key changes. There are some events that change – primarily the way some characters first meet Keisha, and some extra scenes because it isn’t just from Keisha’s perspective. Because it isn’t just from Keisha’s perspective, we also get more backstory and understanding – into the strange cop lady, into Alice’s time in Bay and Creek, a little more into some of the Thistle men, and some more into the Oracles. The writing is nearly same as that of the podcast, with some iconic lines kept in, but also losing much of Keisha’s ruminations (which were one of my favorite parts, boo) and the atmospheric music. The narrator being the same, Jasika Nicole performs this story and all the voices admirably, as expected. The audio drama will always be my favorite because of its production value, but the audio book is not bad either.

Overall, not as awesome in effect as the podcast, but it depends on what you liked best about it. If it was the story, this one is much better rounded as a plot; if it was the atmosphere, the music, the wild thoughts, this one might be a bit of a disappointment.

Is it diverse? The main character is a Black lesbian; also OwnVoices rep for anxiety

Also check out the podcast!

One thought on “Review: Alice Isn’t Dead by Joseph Fink”