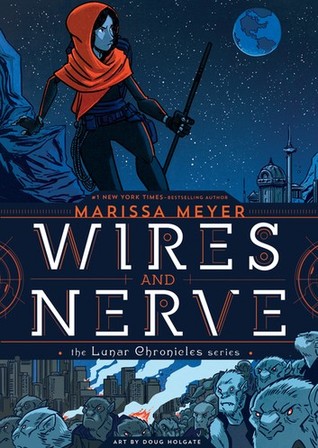 Wires and Nerve, Volume 1 by Marissa Meyer
My rating: 3 of 5 stars

In her first graphic novel, bestselling author Marissa Meyer extends the world of the Lunar Chronicles with a brand-new,action-packed story about Iko, the android with a heart of (mechanized) gold.When rogue packs of wolf-hybrid soldiers threaten the tenuous peace alliance between Earth and Luna, Iko takes it upon herself to hunt down the soldiers’ leader. She is soon working with a handsome royal guard who forces her to question everything she knows about love, loyalty, and her own humanity. With appearances by Cinder, Cress, Scarlet, Winter, and the rest of the Rampion crew, this is a must-have for fans of the bestselling series.

Fans of the Lunar Chronicles will be delighted, like me, to return to the world and see what the characters are upto. With Iko as the main character, this graphic novel series has her being Cinder’s top agent to get rid of the Lunar wolf soldiers from Earth and return them to her kingdom. Iko’s snark, drive and love for her friends is unchanged obviously, but she is also uncertain of her place in this new world, and what role she can have as she stands by Cinder. Her missions are hazardous, but as an android, she is better equipped than most to handle Lunar soldiers, which is why she volunteers. However, rebellion is brewing among those very soldiers as they distrust even the new Lunar Queen.

While the mood of the graphic novel is mostly comic, it also tackles some issues that couldn’t have been resolved in the ending to the main series. Cyborg discrimination will still take time to be resolved, and Cinder’s attempts to get Luna into a stable democracy have just begun. Also, Earth countries are still distrustful of Luna tech, even the one that is to help them from the effects of their magic, as well as what they see as a slow resolution of Cinder’s promises to round up the soldiers. In such a fragile situation, the soldiers themselves feeling betrayed and attacked by their Queen (remember that they are also the victims in this situation, even though they are killers) means it isn’t going to bode well for trust between Earth and Luna. Meanwhile, some characters are looking to take new steps in their relationship (Wolf and Scarlet).

But enough about the political ramifications of the book – what it is also about is Iko, and how she feels sidelined. Iko is not being noticed as a valid member of the Rampion crew, who have since then been hailed as heroes, and her personhood is not even being considered by people other than the crew. However, the worst part of this discrimination probably comes from her supposed love interest, Kinney (who is also Cinder’s guard) – he keeps referring and talking to her as if she is only a machine that glitched, even though his sister is perfectly cordial to her (learn from her, Kinney!). This ‘hate-to-love’ romance is problematic on another level when you notice that he is denying personhood to a Black woman model of an escort droid (the levels of discrimination in that!); even if race is not an issue in this world, it is in ours. Currently, it doesn’t do much with the romance, but I already know it is going to be a Thing, so I’m not a fan of that development, for sure! If you ask me, Iko could have done without that love interest, or at least one who wasn’t so aggressively bigoted about it.

The artwork is also pretty basic (mostly monotone), and I wish we got to see the world of the Lunar Chronicles more vibrantly.

Bottomline: good plotline to extend the story arc from the main series, but problematic aspects to the building romance.

Is it diverse? Iko is an android using a Black woman’s body-type; Cinder (also wears prosthetics), Kai, Winter (rep for mental illness) and some other secondary characters are POC.

Books in The Lunar Chronicles

3 thoughts on “Review: Wires and Nerve, Volume 1 by Marissa Meyer”