I tried out three new podcasts this week – Badvertising, Ash & Blue and EOS 10. Guess which one I loved.

As for the current ones, there were not many to catch up on.

“Three friends who know nothing about business or advertising try their best to take your favorite brands and develop ad campaigns to ensure their viral failure.”

Okay, I may have not paid close attention to the synopsis and went into it thinking it was a comedy sitcom about three friends trying their hand at creating advertisements. It is actually an unscripted discussion podcast with them recalling and recreating brand advertisements. Funny, but not really my thing, so I am dropping this. 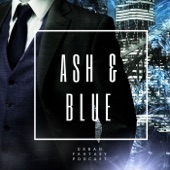 “Ash and Blue – Urban Fantasy for Geeks | A biweekly podcast series involving suits, magic and more cookies than you would reasonably expect.”

Normally, I would be all excited over an urban fantasy audio drama, but this is more like an urban fantasy audio book. It is narrated, not performed. This first episode was about an angel who is also an agent, and who gets a kid killed during a standoff, then travels to Limbo to retrieve her soul, while we also meet one of the three Ladies (of death?). I am not sure if I want to continue – the style is not one I prefer (I had abandoned Moya and Another Kingdom because they, too, had narrative styles) – but I have not yet sent it into my dropped list.

“Doctors in space, a deposed alien prince, a super gay space pirate and a fiery nurse who’ll help you win your bar fight”

Sci-fi comedies may be my favorite audio drama genre. I loved to see the shenanigans they all get up to. Season 1 and 2 had a more sitcom-like style, but Season 3 felt very different in tone – more like a mystery. Still, overall it was addictive (I listened to all the seasons pretty much consecutively) and immersive – I loved the dynamic between Ryan (Dr Forehead who is down for intergalactic sex) and Dr Urividian (who may be my favorite on the cast with his gruff Victorian gentleman vocabulary), the friendship between Levi and Jane (who is a goddamn delight), and the holiday specials (the Valentine’s one has to be my favorite).

“Stevens and Montague meet at a conference.”

Montague may be one of my favorites besides Fred! Once again, he meets someone and asks them out for food only to sound like he is picking them up. Stevens and he then go to a tapas place to hang out, discuss their respective fields (Stevens was being very rude calling geology boring, if you ask me – bad Stevens!) and then get drunk – with Stevens getting way way drunk and being very very silly.

“Wow! The greatest swordsman in all of Foon is going to be at the Vermilion Minotaur today and I get to interview him! I can’t wait to hear all about his adventures. First the commissioner of the Foon Mittens League and now Jak Vorpal! I’m basically the Ryan Seacrest of Foon.”

Very crazy episode about sword sex (not a euphemism), and a Foon version of Smurfs, that are also evil creatures.  Honestly I don’t know what else to say. It is weird, but just the right amount of funny weird. You gotta hear it to judge it.

Season finale! The date means that this is 6 years after the last one, so I was intrigued to see it is a dictation recording from Michael to Amy. With a new assistant, and Amy as the Head of Childhood Development something something, it starts off cheery with a ‘what has happened all these years’ and how they have made Michael more emphatic about his plans for a proper and good implementation of the New Society rules. But then second half made my blood run cold, as he recounts what Vishwathi and Karen have been upto, and what actually gave rise to the events of Season 1. What a way to finish the season!

“Ben & his newly-returned co-host are on remote for The Best Small Town Celebration live from the Main Street Park.”

Sammy is in a bad mood, and there is a lot of things going on in this episode, with Pete throwing opening volleys at Ben, Ben and Sammy bickering on air (about finding Jack), and some indecent exposure on the part of Jacob Williams (someone needs to arrest him), Troy lightly tasing Ben, the Science Institute and HFB stirring up shit. ANNNND there is a new sign off music!!!

“You are worth the fight”

The Penumbra Podcast: Episode 1.14 – Juno Steel and the Train from Nowhere Part 1

“He arrived in the night: Peter Nureyev, the burglar who got away, the thief Juno Steel couldn’t catch. Until he returned, things had been so simple: solving crimes, chasing a killer with her eye on Ancient Martian artifacts, and not letting personal business get in the way. With Nureyev, though, things always seem to get personal very quickly. But Juno has no choice. Nureyev’s the only one with a lead on the killer Juno’s after. He knows exactly what she plans to take next, and according to him it’s something very big, and very dangerous. According to Nureyev, anyway. But the question remains: can Juno trust Peter Nureyev?”

A high stakes card game with more layers and the team of Juno and Peter trying to get information on the most secure vault on the planet! It was fun because Juno was being dragged along for a heist mission to keep a certain Doomsday device out the hands of a dangerous person while also questioning Peter’s motives.

Episode 1.15 – Juno Steel and the Train from Nowhere Part 2

“Somewhere in this desert lies the greatest weapon Mars has ever seen. It’s on board the Utgard Express, a mobile lockbox that shatters the speed of sound at its slowest setting, a train that no one has ever entered… until today. The plan is set. Juno and Nureyev know exactly what they must do to board that train. If there are no surprises they’ll just wake up, drive to a drone launch site in the desert, hijack a drone, and then ride off into the sunset, Martian Weapon in hand. If there are no surprises, that is. But someone in this desert doesn’t much like the idea of things going smoothly for Juno and Nureyev, and the first of his surprises should be arriving at their door right about… now. Welcome to the Penumbra, dear Traveler. We hope you enjoy your stay.”

This one was more focused on developing their relationship, putting in trust brick by brick as they figure out the best way to achieve the same outcome.

Bonus: The Revenge of the Janus Beast

“In the Second Citadel’s Hall of Trophies lie remnants of hundreds of monsters… and some of them are livelier than others. The head of the Janus Beast, for example: it’s been here for weeks, and it’s growing bored. Very bored. Can the Janus Beast’s head break out of its case using nothing but its two faces, magic spells, and one tiny, tiny, little, really-just-impossibly-small brain?”

Extremely funny, and has a recurring character of the Janus beast trying to stage a prison break from their position as a trophy in the second citadel.

“Are you a listener to any of these podcasts? Just wanna scream about the episodes? Tell me in the comments!

We have a Discord server! Come chat with us!