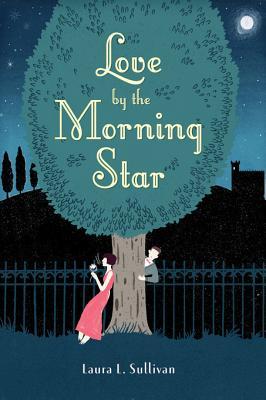 Love by the Morning Star by Laura L. Sullivan
My rating: 3 of 5 stars

Upstairs, downstairs, and in which lady’s chamber?
On the brink of World War II, two girls are sent to the grand English country estate of Starkers. Hannah, the half-Jewish daughter of a disgraced distant relative, has been living an artistic bohemian life in a cabaret in pre-war Germany and now is supposed to be welcomed into the family. Anna, the social-climbing daughter of working-class British fascists, is supposed to be hired as a maid so that she can spy for the Nazis. But there’s a mix-up, and nice Hannah is sent to the kitchen as a maid while arrogant Anna is welcomed as a relative.
And then both girls fall for the same man, the handsome heir of the estate . . . or do they?
In this sparkling, saucy romance, nearly everything goes wrong for two girls who are sent to a grand English estate on the brink of World War II—until it goes so very, very right!

The pre-WII setting for a rom-com already seems surprising enough, so I’ll preface this by saying there is no Nazi romance, thank god. However, we have a fascist’s daughter, Anna, and a Jewish girl Hannah whose identities get mixed up when they arrive at the Starkers, and pursue a romance with the same guy, Teddy, heir to the estate. For further misunderstanding, the two romances happen under the cover of night and Anna is actually romancing another guy thinking it to be Teddy. What I am saying is that, basically, the whole plot rests on misunderstanding and people not clarifying things. And normally, I am not a fan of misunderstandings as a plot devices – mistaken identities are fine, but there needs to be a logical reason for it to happen. And misunderstandings, if done right, can deliver brilliant comedy. However, this book was neither of them.

My main point of annoyance with the plot is that there is a big hole in the form of voices. It is made clear plenty of times how Anna has a shrill voice that she modulates to sound more cultured, and Hannah has an opera singer’s contralto. Even with the different languages in which he communicates with them, it seems impossible that Teddy couldn’t differentiate between their voices. Similarly, Anna not noticing (which is a big joke, considering she is so hypervigilant about people’s reactions) Teddy’s voice in the dark of the hothouse is another impossibility. And that is what the romance rests on to progress – the rest of the household mistaking the girls and treating them as one another could be understood because they either didn’t have contact with both girls or they didn’t know the whole story. But I couldn’t abide by such a huge plothole that isn’t corrected or explained away at the end.

About the characters – Hannah is a free-thinking but naive girl, who didn’t expect much from her relations, so she accepts her position as servant without much question and goes along with what she thinks is the Lady Piripip’s wish to humiliate her (also why not defy her at every point, as would be within her character? plot convenience, that’s why). I thought she was a self-sufficient and smart female lead, but love makes her foolish. Anna, on the other hand, is a schemer who is utterly without remorse, and who had no qualms about letting Hannah hang for her crimes, so I was already hating her so much. Even until the end, she maintains her self-centered and selfish attitude, and the bond between the girls wasn’t developed enough to let her forgive Anna so easily, even though throughout the book both Hannah and Teddy are shocked by how ignorantly bigoted she is being.

Despite these problems, though, the book had its good moments. It talks about the atmosphere of hate and the persecution of the Jewish people, even in what is supposed to be a comedy. I say ‘supposed to be a comedy’ because while this does have some good jokes borne of misunderstanding, they are mildly amusing, and not like comedic entertainment. Hannah’s POV doesn’t gloss over her very real fears of her parents, her anxiety over the fate of her country, and the simple loss of their culture to a movement of hate. Additionally, the book also acknowledges queer characters, like Hannah’s friend, and the Duke of Kent, even though I feel they could do with a bit less sexualization. The language, while expressive and dramatic, calls more to mind the Victorian era than the 30s, and the writing keeps a good pace, even if the novel as a whole feels a bit stretched out.

Overall, an okay read, but I woudn’t say it a laugh out loud comedy.