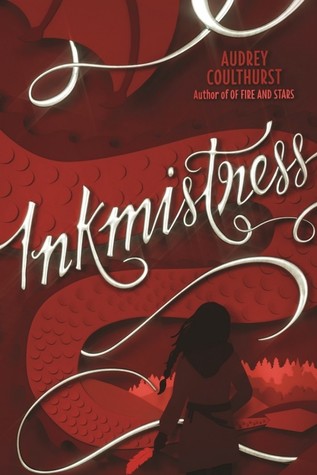 Inkmistress by Audrey Coulthurst
My rating: 4 of 5 stars

A sweeping, action-packed, and romantic fantasy full of dangerous magic and dark choices, perfect for fans of Tamora Pierce and Kristin Cashore—set in the same world as Of Fire and Stars.

Asra is a demigod with a dangerous gift: the ability to dictate the future by writing with her blood. To keep her power secret, she leads a quiet life as a healer on a remote mountain, content to help the people in her care and spend time with Ina, the mortal girl she loves.

But Asra’s peaceful life is upended when bandits threaten Ina’s village and the king does nothing to help. Desperate to protect her people, Ina begs Asra for assistance in finding her manifest—the animal she’ll be able to change into as her rite of passage to adulthood. Asra uses her blood magic to help Ina, but her spell goes horribly wrong and the bandits destroy the village, killing Ina’s family.

Unaware that Asra is at fault, Ina swears revenge on the king and takes a savage dragon as her manifest. To stop her, Asra must embark on a journey across the kingdom, becoming a player in lethal games of power among assassins, gods, and even the king himself.

Most frightening of all, she discovers the dark secrets of her own mysterious history—and the terrible, powerful legacy she carries in her blood.

A hero’s journey with a demigod at its center, Inkmistress is about a young woman who learns to trust her own power and to find her purpose. Asra has been raised as a herbalist all her life, told to never leave the mountain she grew up on with her mentor. But when she tries to help her girlfriend, she accidentally causes a tragedy, which she then spends most of the book trying to rectify. Asra’s journey begins with trying to stop Ina from exacting her vengeance, but as she learns of the world outside, meets another demigod, she yearns to know more of her powers and her origin, so she can better understand it, as well as find a way to negate the effects of using her true power.

I must first address an issue that bugged me while reading the book – the initial catalyst event was Ina’s grief making her seek vengeance ad Asra tries to stop her because (a) it would be treason and (b) it would result in a war that could take lots of lives. However, the monarchy is always unstable because anyone can challenge the ruler, as long as they are powerful enough – so Asra worrying about treason (for a king she has never shown allegiance to) seemed a bit unrealistic? And secondly, the worry about war isn’t even a real threat because, again, generations of monarchs have challenged their predecessors without precipitating a war. Mid-way through the novel, Asra actually has a genuine reason for stopping Ina, a reason that is bound up in the mythology of the world, so it would have made a more compelling reason if she knew that from the start, instead of a half-rational reason for stopping a girl she loved.

Moving on, Asra’s story begins as a naive woman in love, who thinks she can fix a happy ending for herself and her lover, but she grows to find a more meaningful love in someone who is kind, gentle-hearted and whose feelings she can trust. She also begins as one who is afraid to use her powers, because of the far-reaching consequences of trying to change fate, and that fear drives her to an isolated life, but when she lets go of it, she can move forward to be what she wants to be. I loved her development arc as she faces her fears, her insecurities and grows into a defiant woman who takes charge. Her romance with Hal was a bit underdeveloped but with a plot that had so much going on, it felt okay to not give it too much attention and instead first have it as a friendship.

The world-building is interesting, calling upon a Greek mythology-like rule of the gods, and them being tied to the land and its ruler much like ancient Greece cities having a godly patron. The ending was unexpected but good, tying up the threads of the story in a satisfactory manner. Overall, it was an enjoyable read.

Is it diverse? Asra is bisexual, and so is Ina. Both their love interests are POC characters. There are other queer characters, including a gay couple, and two genderfluid gods.