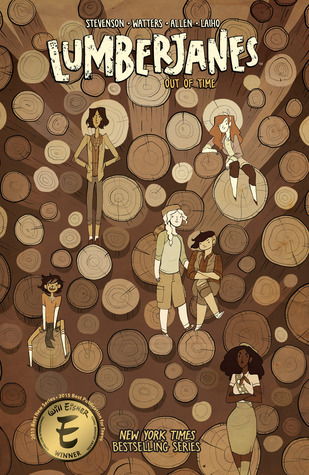 Lumberjanes, Vol. 4: Out of Time by Noelle Stevenson
My rating: 4 of 5 stars

The mystery of history!

Jen just wants a normal lesson with her cabin, teaching Jo, April, Mal, Molly, and Ripley the basic survival skills needed without any supernatural intervention. But when a blizzard hits camp, Jen finds herself separated from the girls and in more trouble than ever…until a mysterious taxidermist swoops in to save the day. Who is she and what is her relationship to Rosie? Join Jen as she finds a way back to her girls, and a way to save the day!

This volume delves into the past of the camp, as an ex-Lumberjane comes into the picture. When a sudden blizzard strikes them along with some beasties, the girls get separated from Jen who is saved by a hunter. Meanwhile, Rosie and the Bear Woman take a more central role in the plot, as they recall how the camp was during the time when Rosie was a Lumberjane scout herself. What’s further interesting is how it is alluded to that Lumberjanes are being trained for some purpose and that there is a conspiracy hidden from them. (Monster hunters?) And for the coup de grace, another hint is thrown that maybe time doesn’t work as intended on the camp.

This volume didn’t have the girls taking much of role except being lost in the wilderness, but I didn’t mind because the plot development was good. As for the girls themselves, Jo has a conflict with Barnes, from the boy scouts camp, which by the way honestly sounds like a dream (with a thousand cats!) without toxic masculinity now that Apollo isn’t running it. It is also hinted at that Jo is trans. For now, I am more invested in finding out the history and origins of the camp, so I am excited to see if further volumes will do so.