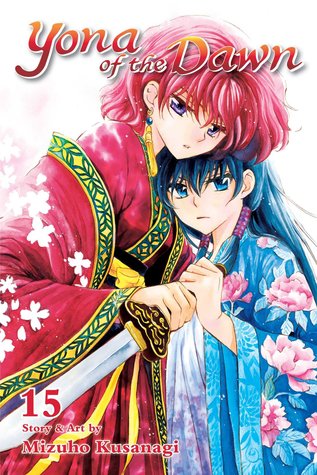 A drug known as “nadai” has spread throughout the Water Tribe territory, so Yona and Riri, the daughter of the Water Tribe chief, are determined end this drug crisis. However, their task is an uphill battle, and they couldn’t have imagined the dangers that await them!

This volume’s cover is apt because the story is in which both Yona and Riri get shit done! Continuing from Yona’s battle with Hyo’s henchmen that hanged in the last volume, she survives thanks to the intervention of her dragons. While recovering, her resolve strengthens further as she feels terrible for making everyone worry about her and feel responsible for not being able to protect her. Which she, by the way, puts into action by moving on to Shinsui. Meanwhile, Riri, who returns to Suika to exhort her unflappable father to take action against the Nadai trade but when she realizes that his methods and her methods vary, she decides to take matters into her own hands.

There are some tender moments in this volume, of course, as you see how the dragons and Hak all feel miserable about being helpless to save Yona from her injuries. There are also some hilarious moments, and with the reappearance of Su Won, there is an interesting development. I wish I could have kept his appearance as a spoiler, but it was such a crucial element of the later chapters, because they are both hiding their identity from Riri and have to pretend not to be enemies but you can see the meaningful glances. Once again their paths align, but I don’t know how long they will keep crossing paths and one day find themselves back on opposite sides. Honestly, part of that is what keeps me going for this series!

Overall, a volume filled with emotional and plot development, as well as a distinct emergence of Riri’s character as a main player.

This edition releases on December 4, 2018