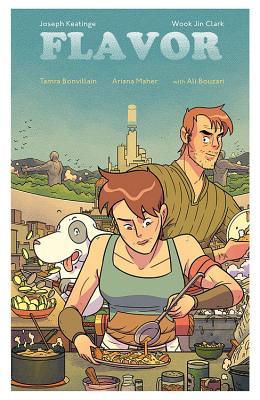 Within a strange walled city, an unlicensed chef discovers a mystery that threatens to end it all. Join JOSEPH KEATINGE (GLORY, SHUTTER) and WOOK JIN CLARK (Adventure Time: The Flip Side) on this culinary epic adventure–FLAVOR–where chefs are the ultimate celebrity and food is the most valued commodity. The high-stakes competition of Hunger Games collides with the lush, MIYAZAKI-esque worldbuilding in this delectable new ongoing series featuring culinary consulting and an introduction by ALI BOUZARI, renowned food scientist and author of the IACP Award-winning cookbook Ingredient: Unveiling the Essential Elements of Food. Perfect for readers of BONE and LUMBERJANES, but with way more crepes and the world’s cutest dog!

This book was an enjoyable fantasy about a city with cutthroat culinary traditions, but a lot of the fun is dampened by the fact that hardly anything of it is explained. Xoo is a trained but not certified chef, and Anant is a novice chef who is also the son of the city’s Lord – both live in this city where being a chef is a BIG DEAL. There’s also a mystery regarding chefs who are disappearing and the authorities being involved in it. Their stories don’t really intersect except for one common character between them, and for the most part this volume is about the impending culinary competition about to the held in the city. One thing I didn’t understand is why the non-certified chefs would even put in that much money to participate when they keep saying they are definitely not going to win. Seems Xoo is the only one who is fiscally smart? The artwork is good, and I love the character design. Overall, this first volume has been hiding more than it is revealing, essentially just keeping the reader confused and I don’t wholly appreciate it.